Anyone who believes that dogs and other pets are simply an add-on needs to think again. Social media is full of descriptions and photos of people’s ‘fur babies’, and ‘pet parents’ are prepared to spend plenty of money in pursuit of their pet’s happiness. You might argue that the best way to do that would be by spending more time with them. But, the proliferation of dog-walking and pet-sitting services suggests that you would be at odds with the zeitgeist.

If you need a pet-sitter or dog-walker, what is your first port of call? Many pet owners are increasingly turning to online marketplaces such as Rover, the world’s largest network of ‘5-star pet sitters and dog walkers’, which provide both convenience and confidence.

Owler lists at least 10 businesses that are ‘similar or alternatives’ to Rover, many with revenue over $100 million. Rover itself has an estimated annual revenue of $120 million, and has already bought three of its competitors, GoFetch in 2019, London-based DogBuddy in 2018 and DogVacay in 2017. It has also invested in Brazilian company DogHero, and started expanding into cat care in 2019. It has raised over $375 million across 11 rounds of funding since its foundation in 2011. Its most recent funding round, in May 2018, was for $30 million.

Rover’s marketing is based on ‘pets as family’

Rover says that it aims to connect ‘pet parents’ with sitters who will ‘treat their pets like family’, and wants to help ensure that everyone can have a dog or a pet if they wish. The platform’s over 300,000 sitters operate in more than 34,000 cities in 10 different countries. More than 95% of reviews are five-star. Rover also boasts that a service is booked via the platform every minute. On its social media—Twitter, Instagram, Facebook and Pinterest—Rover describes itself as ‘the Dog People’, making clear that its sitters are there as much for the dogs as for the peace of mind of their owners.

Rover offers several different services for both dogs and cats 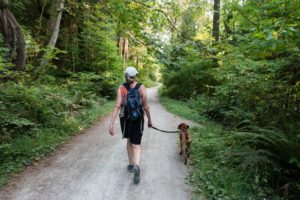 Rover’s services are supported by technology and expertise

Rover understands that pet owners need to have confidence in their sitters. As well as asking users to provide reviews, it offers the Rover Guarantee, 24/7 support, vet consultations and GPS walk tracking. The Rover Guarantee covers costs in the event of certain injuries or damages resulting from care provided during a Rover-booked service. These include vet costs for a dog who is being looked after, or where a ‘Rover dog’ has injured a dog-sitter’s dog and the owner would be liable, as well as damage to a pet owner’s property caused by a sitter.

As well as a platform, Rover also provides information for pet owners

Via its site TheDogPeople, Rover provides advice and information for pet owners about issues as diverse as puppy breath (and how to brush your dog’s teeth) and when you should be concerned about dog sneezing. Its information is from vets retained by the site. It also shares fun stories about dogs, such as this one about an old dog who kept howling in his new home, and facilitates photo sharing and the sending of ‘Rover Cards’. All this serves to demonstrate the community nature of the marketplace, and emphasise the ‘family feel’ of Rover.

Rover has received a number of tech awards and accolades

These include Next Tech Titan in Geekwire’s awards for the Pacific Northwest in 2019, and a Tech Impact Award from Seattle Business in 2018. It was also named one of the world’s 50 most innovative companies by Fast Company in 2018. Philip Kimmey, the company’s co-founder and Director of Software Development was named Young Entrepreneur of the Year for 2018 by GeekWire, and listed as one of ’30 under 30’ in 2017 by Forbes. Aaron Easterly, the CEO, was named CEO of the Year by GeekWire in 2016, and the company has also received a number of accolades for being a good place to work.

Photo by Stephen Goldberg on Unsplash